The cadets are at it again. Thanks to @dragon_dodo and @FennekLyra.

Agent Lyra and Agent Dodo were bored. After several weeks of suspending Gale’s desk in bizarre positions, fencing on the office chairs and sneakily pilfering Beveridge’s ginger beer, they had quite run out of things to do.

Draped over chairs, they were randomly browsing the interwebs in an attempt to kill time until the next case. All was peaceful, the silence only broken by occasional clicks, until suddenly Agent Lyra slipped backwards off her chair with a screech of dismay.

‘AAAAAIIIIII, THEY’RE AT IT AGAIN!’

Dodo glanced down at Lyra and raised an eyebrow. ‘Who and what is it this time?’

‘Mhm. This one’s a real scoundrel, too.’ Lyra quickly printed off the evidence, folded it into a paper plane and threw it in a graceful arc that ended when a ballpoint pen punctured a wing, causing the plane to drop neatly into the in tray.

‘You don’t reckon evidence would be more useful without the holes?’ queried Lyra.

A resigned sigh echoed from the corner.

Agent Dodo unwrapped the plane and frowned. Then frowned some more. 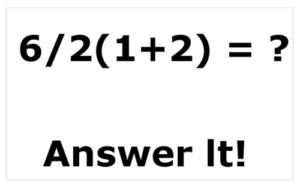 ‘Gosh, this one’s awful! It’s completely ambiguous! You could argue it either way!’

‘I know, right! It could be either 9 or 1 depending on whether you take the (1+2) as being in the denominator or not.’ Lyra pondered for a moment. ‘Clever strategy to get a post popular, though. People love nothing more than arguing on the internet. Get everyone at each other’s throats and the post gets millions of views!’

‘Dire. A decent chunk of people answering should be shut in the cells with a book on basic arithmetic.’ ((The answers on the facebook post, while mostly 1s and 9s, had an odd smattering of bizarre answers: 7, 2, 12, and….x. Hmm.))

‘Yuck. We can let the 9s and 1s off, since the correct answer is WRITE THE DAMN THING PROPERLY, so the post is the key offender here.’

‘Mhm. It’s a shame that this is the only maths you really see bandied about like this. There are so many cool bits that could definitely go viral rather than silly argument fodder like this.’

Dodo sat up straight. ‘I know! There are tonnes of good logic puzzles you don’t need to have a background in maths to tackle.’

‘What, something like: ’Here is an interesting maths puzzle. We’re posting this to combat the recent surge in idiotic ‘bet you can’t do this!!!’ posts. If you solve it, post a puzzle of your own!’’

‘Yup, exactly. Though, do we really want to deal with trolls?’

Dodo grinned and rubbed her hands together. ‘I would love to deal with trolls…’

Ask Uncle Colin: What shape is this?

A nice bit of nrichment