The setup is: one side of a square is tangent to a circle, and two corners of the square lie on the same circle. Which is larger: the perimeter of the square or the circumference of the circle? (My labels are different to Greg’s. That’s his fault, obviously.) 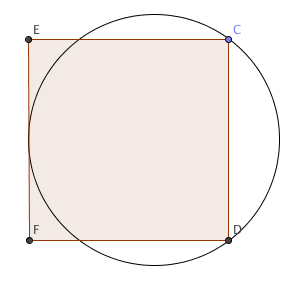 The typical approach is to adopt some sort of algebraic approach, but I – having been trawling around for sneaky geometrical tricks to approximate $\pi$ – had a more elegant trick up my sleeve.

It involves a circle theorem that crops up in IGCSE but not at GCSE, relating to the lengths of the intersections of chords. If you have two intersecting chords of a circle (as pictured), the products of their parts are equal – that is to say, $mp = nq$ as drawn. 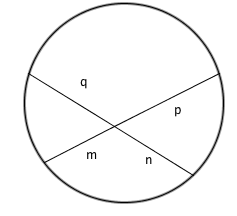 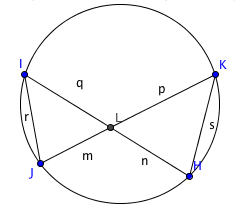 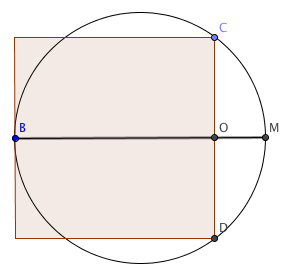 The circumference of the circle is then $10π \approx 31.4$, while the perimeter of the square is 32 – so the square’s perimeter is larger.

That puzzle wasn’t enough for @tombutton, though: he asked:

Sphere goes through 4 vertices of a cube and midpoint of the opposite face. Which has greater surface area? pic.twitter.com/fUnSWgTfgu

Happily, this falls to the same analysis, although it’s a bit harder to see (things in 3d usually are). The tangent point and two incident points that don’t share an edge (i.e., they’re diagonally opposite on one face) are on a circle which shares its centre with the sphere (and hence, its diameter is the sphere’s diameter). Again, if the side length is 8, the diagonal of the face is $8\sqrt 2$, so the product of the half-chords is $4\sqrt 2 \times 4 \sqrt 2 = 32$; the diameter splits up as 8 (from one face of the cube to the other) and 4 (using the theorem).

Ask Uncle Colin: How do I multiply big numbers together?

Logarithmic inequalities, and why I always used to get them wrong

Secrets of the Mathematical Ninja: Converting degrees into radians