Hi, SCHWARZ – well, different strokes for different folks! There’s nothing wrong with getting an ecstatic frisson from a nice bit of maths. Some mathematicians get that all the time!

The first sequence is almost a linear progression, although the floor function means it’s not a straight line – each number is generally 3 more than the previous one, but occasionally 2.

The second, on the face of it, has little in common with the first. The variable’s on the bottom, for heaven’s sake! However, there’s a neat trick we can employ ((isn’t there always?)). $2^\frac1n = e^{\frac 1n \ln(2)}$, which means the second sequence is also:

Multiply top and bottom through by $n$:

As $n$ gets larger, the second (and subsequent) terms on the bottom get very small – in fact, if we rewrite it Mathematical Ninja-style as:

he’d estimate the proportional error as $\frac 1{2n} (\ln(2))$, which is less than 1% by the time $n=35$ or so. The two sequences are very close together – in fact, if you ‘turn them continuous’ and plot them on Desmos, you get two graphs that differ by almost exactly 1. 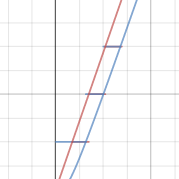 I think the two sequences differ whenever the Ninja’s error is bigger than the shortfall between the almost-linear sequence and an integer; a determined mathematician would look for continued fraction approximations to $\frac{2}{\ln(2)}$ and check those!