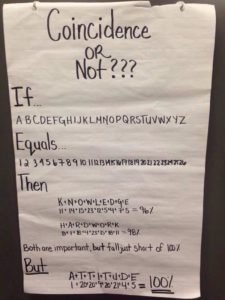 Every few weeks, this bit of motivational excrement does the rounds on twitter (I saw it here, but it comes around from all sorts of sources).

More to the point, there’s no reason to expect a word with a score of 100 to have anything to do with success. There are loads of them, from the really unwise (asbestos, quicklime, headbutts, firebombing, tetanus) to the educationally ill-advised (bandwagons, gobbledegook, haranguing, inanities, whiskey) to the absurd (piggybacks, dinginess, masochism, semaphore) and some - a few - that might work: numeracy, analysis, colleagues, culture, discipline.

Misapprehensions and mischievousness, meanwhile, both give you 200.

This relies on the assumption that letters in words are uniformly distributed, which they’re not (E, for example, shows up more often than X) - I’d expect the mean value to be slightly lower than 13.5, and the standard deviation to be a bit bigger - but in any event, 100 points is not an unusual score for a word of moderate length.