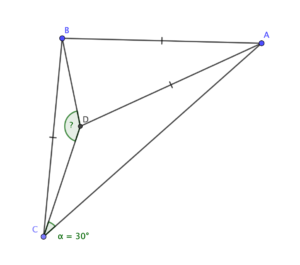 When I’ve got isosceles triangles knocking about, I like to add in some circles. Circle theorems, as much as I think they’re a bit of a gimmick at GCSE, are quite useful in geometry puzzles. 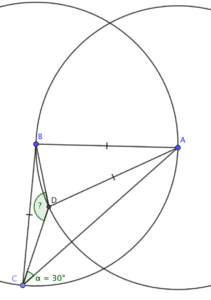 Now, how do these circles help?

How about that top intersection?

The way the circles are set up, there’s an equilateral triangle formed by points A, B and the upper intersection of the circles - let’s call that point E. 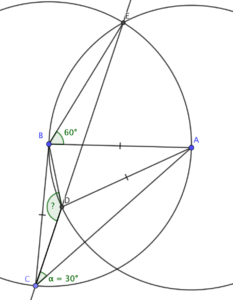 That makes it easy.

Now consider line segment BE, which is a chord of the circle centred at A. It subtends 60 degrees there, so it subtends 30 degrees at D, on the circle’s circumference. 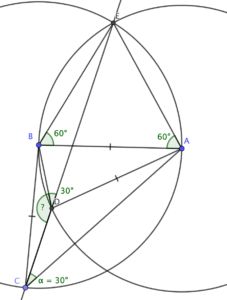 And since CDE is a straight line, angle BDC must be 150 degrees.

I’d be curious to learn whether there’s a slicker way of doing that, perhaps one that doesn’t involve circle theorems! Drop me a comment if you can see one.