A day off ill, and the chance to look muddle-headedly at a tweet from @trianglemanscd long ago:

OK Geometers, I'm gonna need you to problem solve for me. pic.twitter.com/00njFhiBEw

There are loads of valid approaches here, and I’m going to talk of three.

Step 1: go to Google maps Step 2: find the scale of the map Step 3: use that to calibrate the distances.

Of course I could do that. But that’s geography, not maths.

A more mathematical approach would be to centre a circle on each of the the landmarks with a radius proportional to the given distance to the mystery hotel. Slide the scale until the circles all intersect, or close enough.

This is becoming more mathematical, but still a bit boring: my best effort gives a location somewhere between Madison and Union, where there are half a dozen hotels.

But as a mathematician, fudging $k$ to get an answer feels a bit dirty. The circles don’t intersect properly because the distances are rounded. Surely we can do it another way?

Of course we can.

For example, the mystery hotel is marked as 0.3m from both Pike Place Market and Columbia Center. Or rather, both of those landmarks are between 0.25m and 0.35m away.

Or rather rather, the ratio of the distances from our hotel to those landmarks is between $\frac{5}{7}$ and $\frac{7}{5}$. What does that look like? 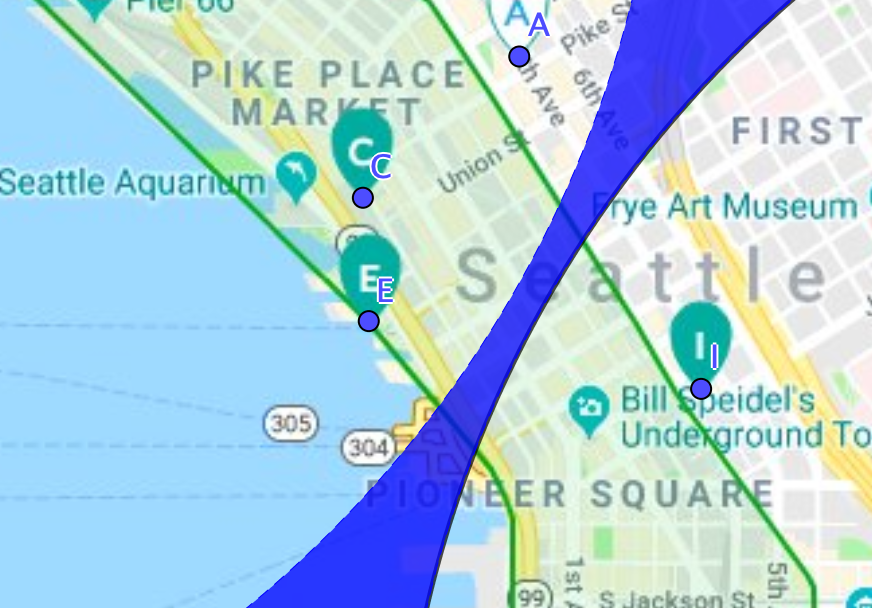 A large circle around each landmark is excluded - and I can do the same with any pair I choose: 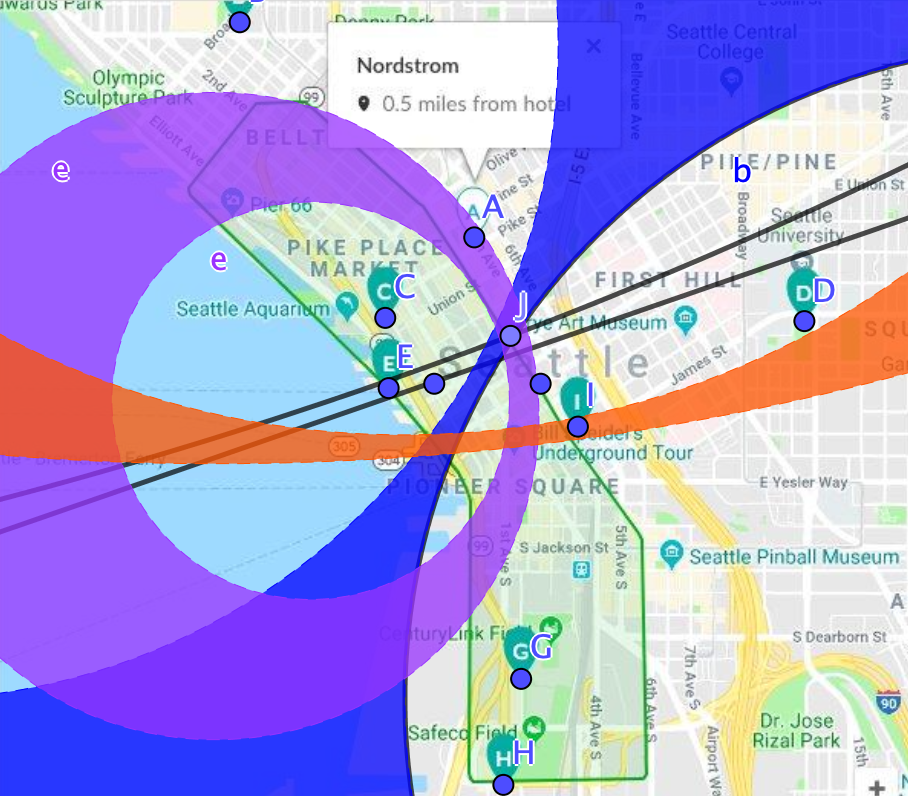 Several observations here: first, the orange region, centred on A and G, seems to disagree with the other pairs I picked. I don’t know why that is - possibly the distance is measured from a different part of CenturyLink Field. Secondly, the others converge on a point 2.5 blocks from both Union and I-5 ((Oh good grief, sudden flashback to the one time I drove on that)) - which could reasonably be the Executive Hotel Pacific or the West Seattle. (There are several other plausible options nearby).

It was, it turns out, neither of those, but the Kimpton Alexis, several blocks further from the freeway – astonishingly, bang on where the bulk of the circles coincide in the “slightly nicer way”!

I don’t know what the take-home message here is, only that it was a nice thing to play with, and I’d be curious to hear what other methods you might try!

* Accessibility features on images are currently unavailable owing to a glitch on the website. I hope to find and address this before it goes live, but who can predict?