This article has also been published as part of the Relatively Prime zine.

The student yelped, and found his wrists and ankles strapped to the wheel before the lesson had even started.

“Good morning,” said the Mathematical Ninja. “I think you and I need to have a little… talk.”

The first knife landed between the student’s fingers. “Bu-bu-bu…”

“Do keep still, won’t you? I’d hate for anything to go wrong with this demonstration, which I will undertake while blindfolded.”

A whimper of understanding.

“Lucky that was a custard pie rather than a knife, eh? You see, there are very many problems with your method, any one of which I could pick apart. However, I’m going to cut… (I heard you flinch there. Very bad idea.) I’m going to cut straight to the chase and show you how to use pretty basic maths to work out the value of π.”

“No, you’re wrong by about 0.005, and I’ll show you why your value can’t be π. Let’s start with a very rough example to get the idea straight: consider a 3-4-5 triangle. You’re familiar with it? Excellent. Can you see this picture? Of course not, your face is covered in custard pie. Let me get the hose. Better?” 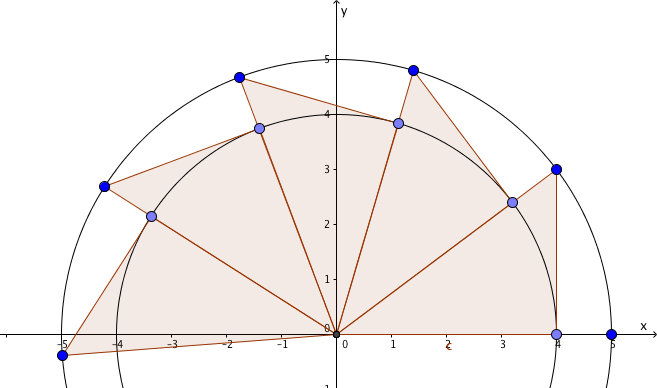 “Cold? It can’t be that cold, it’s liquid. I can warm you up if you like, I have a flame-thrower? No? OK. Where were we? Ah, yes. So, you can see that when I place copies of this triangle point to point, it takes five of them to reach the negative x-axis, agreed? That’s easy enough to prove with the compound angle formula for tangent.”

“I don’t see how that invalidates my’ll shut up now.”

“You’re right, to an extent: your value of π does lie within these less-than-impressive limits. However, there’s nothing particularly special about a 3-4-5 triangle, any right-angled triangle would work just as well.”

“You’re going to do it with smaller triangles?” whimpered the student.

The Mathematical Ninja idly threw three darts into the gap between the student’s arm and ear, muttering “one hundred and EIGHty, pretty much the only time you should say that when looking at a circle” under his breath.

He paused, and the student said nothing. This didn’t invalidate his number, but he could see where it was going.

“Surely,” said the student, finding his tongue at last, “you don’t expect me to take those numbers on trust?”

“No, Mr Reddy,” said the Mathematical Ninja, “I expect you to pie.” Splat. “And don’t call me Shirley.”