Right, listen up, everyone. I know you’ve already made your new year’s resolutions, and probably broken most of them by now, but I’ve got one for you to add to your list. 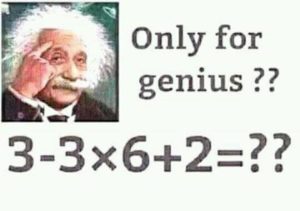 Anything with a picture of Einstein on it. Anything that says “only for genius??” [sic] or “98% will fail!!” or “Can you solve this?”. Any badly-formatted mathematical notation with a misused equals sign. You know the kind of thing I mean.

At the very best, these things are a test of your knowledge of conventions. In most cases, they are either a) flat-out wrong, b) not uniquely determined, or c) attempts to get hold of your details on Facebook. Often all three. They are rarely, if ever, anything to do with actual proper maths. They serve to confuse and belittle far more than they serve to improve anyone’s understanding; even the clear, helpful and ‘correct’ answers are generally drowned out by the loud, confident, wrong ones.

These things construct and maintain a narrative that maths is a scary, confusing place that’s only for genius [sic], an alternative reality that’s very useful for demagogues who rely on their electorate not understanding basic maths.

It’s fake maths. Join me in resolving to call it out.

Or, at the very least, stop tagging me in the sodding things. Thank you.