It’s encouraging to see a few less-predictable questions coming up in the new GCSE and A-level specifications. @mathsjem highlighted an especially nice GCSE one:

It’s a good question. Laid out traditionally, you have 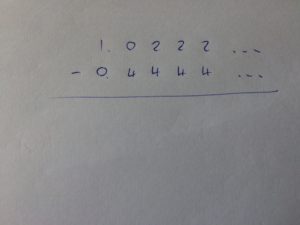 and there’s no right-hand end to borrow from.

Obviously, ‘doing it with fractions’ is the way I’d like to see it done. But can it be done arithmetically? You bet.

One possibility is the ‘look ahead’ method, which starts from the left and says:

1-0 would normally be fine, but we’ll need to lend one to the right, giving us: 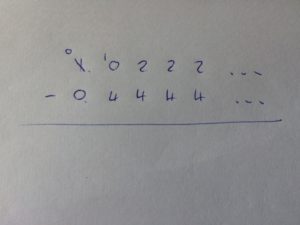 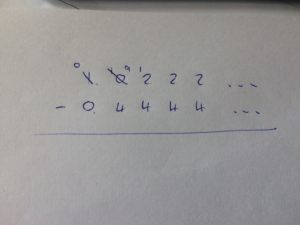 Similarly, 12-4 would be fine, but we’ll need to lend one to the right: 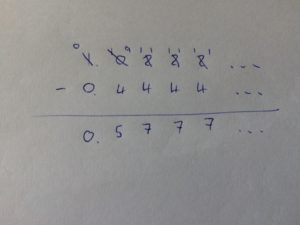 I’m not a fan of this method, not just because it’s a pain in the decimal point to typeset. If you’re happy to accept that $0.\dot9 = 1$ (because it does, dagnabbit), there are a couple of alternatives.

This is, of course, all a bit handwavy; however, it can be formalised using geometric series if you’re so inclined. That said, it’s an awful lot easier to do it with fractions and avoid all of this recurring decimal nonsense.

An insight into the mathematical mind: Box-Muller transforms