My dad tells me that, above the blackboard in his 1960s Scottish high school, was a banner with the letters ‘SOH CAH TOA’ written out on it. Any questions about the banner were brushed off with a smile and ‘you’re not old enough to learn about SOH CAH TOA yet.”

Which, I have to concede, is a great way to pique kids’ interest in the topic. I’ve often wondered about the idea of telling students they’re not old enough to know about maths yet, it’s for over-16s only - and then let them get on with finding out the details on the sly.

However, SOH CAH TOA is stupid - there, I said it

There are - if you count the SOH CAH TOA way - 11 types of right-angled triangle questions. (Finding the hypotenuse or a leg ((a short side’)) given the other two sides; three versions of finding the angle given the other two sides; and six versions of finding one side given an angle and another side.) If you ask me - and I suggest you do - that’s silly.

That’s straightforward. If you’re solving triangles the Table of Joy way, it usually makes sense to find the last side, just in case you need it.

Oh! If you have two angles of a triangle, it’s easy to find the third, isn’t it? Especially if one of them happens to be a right angle. You simply work out $\frac{\pi}{2}$ minus the other angle.

Oh, fine. If you MUST use degrees (radians are much better), it’s 90 minus the other angle.

At GCSE, you get given the sine rule on the front of the paper. At A-level, nope, you have to remember it. It’s not exactly difficult, though:

What you do once you have either all three sides (and the right angle, don’t forget) or all three angles (and a side), is label the corners of the triangle like the picture, with each angle (a big letter) opposite its corresponding little letter.

Also, write out the sine rule, and put a circle around all of the information you have, and a square around the thing you don’t know. If there’s a fraction with one of its numbers unshaped, that’s fine - just cross it out. Neatly.

The Sine Rule with the Table of Joy

Here comes the clever bit! You can even do this without drawing the whole table - but if you’re curious, you can buy Basic Maths For Dummies

and/or Numeracy Tests For Dummies

to see exactly how the Table of Joy works.

Here’s what you do: 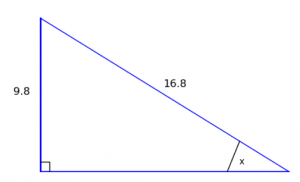 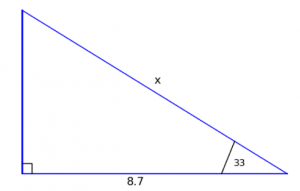 So there you go. A simple, easy way to solve any right-angled triangle without having to mess around with tan and cosine.

Why is this better?

Oh yeah, why is this a better approach than slavishly learning all 11 possible right-angled triangle types? Because this method also works for non-right-angled triangles - although you also need the cosine rule instead of Pythagoras for some of those. It seems daft to me to learn a dozen different ways of doing special cases when you can learn a handful of general cases and be done with it. So there!

(Image by fdecomite used under a Creative Commons by licence)

A strange number base

Dividing by 42 - Secrets of the Mathematical Ninja